When my family finally caught up with the rest of Britain and got a video recorder in the late 80′s the first film we rented was ‘Coming To America‘ starring Eddie Murphy; a film I still have fond affection for now and it was (kind of) exciting for me to go to the apartment. Its on 392 South 5th St at Hooper St just a minute away from Hewes St Metro station. When African Prince Akeem (Murphy) and his servant Semmi (Arsenio Hall) arrive in ‘Queens’ (below) they look for lodgings at the nearest apartment complex which just happened to be this place in Brooklyn. When Akeem first meets the landlord you can just about see the number of the building on the front door. 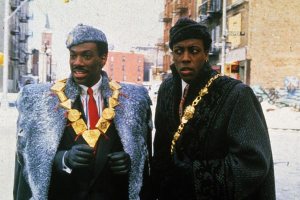 I was actually more interested in locating the McDowell’s restaurant (below) which featured heavily throughout with Akeem and Seemi working for Cleo McDowell at this converted restaurant. It is at 8507 Queens Blvd near Grand Av Newtown metro station in Queens but when I was in the vicinity (on my way to find a Spider-Man location or two) I couldn’t see it so I’ve taken this one from the excellent onthesetofnewyork.com site. It’s actually a ‘Wendy’s’ Hamburger restaurant at this location that doubled up as the fast-food chain which probably gave McDonalds lawyers a bit of a headache! 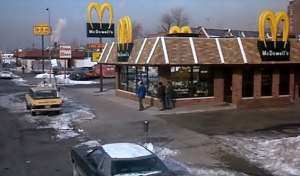 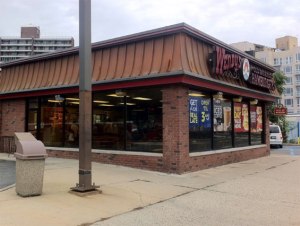 Another place I somehow missed (or rather forgot to photo! There’s a lot of things to take care of on these trips that its difficult to keep up with it all sometimes) was the Waldorf Astoria Hotel (above right) at 301 Park Avenue. Akeem’s father King Jaffe Joffer (James Earl Jones) checks in here after receiving Semmi’s telegram.

The basketball match where Akeem goes on a double date with Patrice McDowell, Lisa McDowell and Darryl Jenks is at Madison Square Gardens (below) at 4 Penn Plaza. 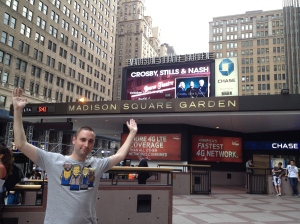