The much anticipated Star Wars movie hits the big screen at the end of the year and despite my earlier reservations a couple of years ago I am now not so surprisingly on board with the story continuing. The second teaser trailer was premiered at the recent Celebration event in Anaheim as did the trailer for season two of ‘Rebels‘ which really whetted my appetite for this Visions exhibition in Roppongi. Of course I rarely need anything to get me excited about this franchise!!

Once I’d finally located the place I exchanged my pre-paid ticket (bought at a discount store for ¥1580 instead of ¥1800) for the entrance to this exhibition which is on the 52nd floor of the Mori Arts Center. First impressions were not even  of stuff relating to the sci-fi saga but of the amazing views of the concrete jungle that is Tokyo. 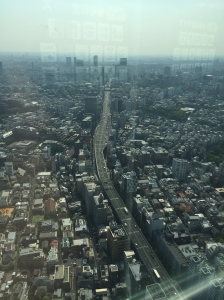 The introduction area offers a few treats with the main feature being Darth Vader’s meditation chamber which you can have your official photo taken in front of although the same photographer will also take pretty much the same picture on your camera phone. I was happy enough with that rather than shelling out ¥1300  for the special souvenir photo in a special display card design. 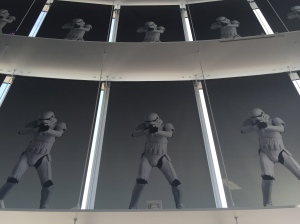 This exhibition comes in six sections; the original visions, vision of force, vision of battle, vision of saga, vision of galaxy and vision of droid. Sadly no photography is allowed in these areas which feature many props including lightsabers, blasters, helmets (including the Vader reveal parts from ‘Return Of The Jedi‘), busts, costumes and original art created by artists hand-picked by George Lucas himself. 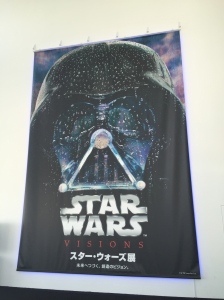 Film clips are played on monitors throughout to provide the symmetry between the planets, battles, miniature spaceships or whatever and how it was seen in each movie. It’s perhaps the saga segment that is the biggest and most fascinating with the centre of the room filled with a collection of costumes and props used on set for the likes of Luke, Leia, Han Solo, Boba Fett, Darth Vader, Yoda, Obi-Wan Kenobi and a Stormtrooper.

As someone who has travelled to the likes of Tunisia, Italy, Spain, Guatemala and erm, England in the name of tracking down the locations used throughout the saga I was very interested to see stuff from the many planets used. I was quite fascinated by a map showing all the planets and their location in relation to each other. There are hundreds of them and proof that every part of the galaxy far, far away is considered very thoughtfully. This galaxy section also possesses a statue of Jabba the Hutt and screen-used ewok, jawa and tusken raider costumes. 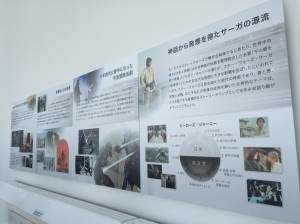 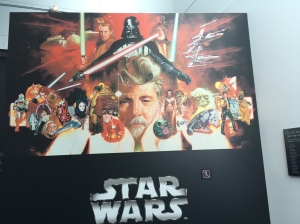 C-3PO and R2-D2 appeared in all six Star Wars films and the final section is devoted to these symbolic characters with the main attraction being the glass cabinet display of the full-sized droids.

Needless to say there was a Star Wars Exhibition Special shop to round things off with all manner of goods that the merchandise-loving Japanese were snapping up in droves. Naturally, I also bought a few additions albeit nothing more exciting than some stationery. 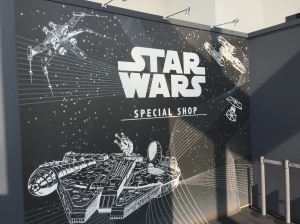 You can even go up to the Sky View Deck (¥500) to have your photo taken with Darth Vader amidst the Tokyo city view. That costs a further ¥2000 but having had my fair share of Vader pictures over the years I actually decided to not plough any more money into the Star Wars coffers. 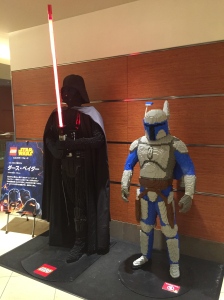 That wasn’t the end though as on the way down to ground level I came across the life-size lego replicas of Darth Vader and Boba Fett (near the Lego shop) followed by the Stormtrooper helmet art. This was similar to the life-size Darth Vader creations seen at the Celebration Japan event in 2008 but on a smaller scale this time. 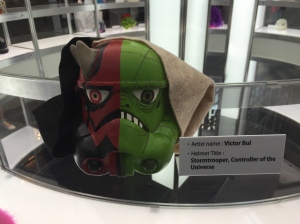 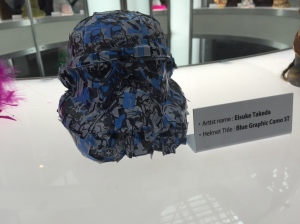 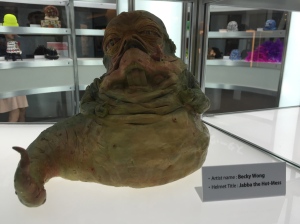 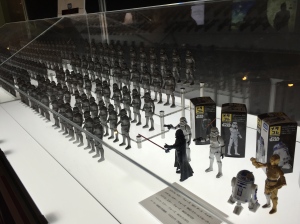