We take a little detour from the usual filming locations to take a one-off look at a few pivotal shots which were used in this popular 1990′s BBC sitcom featuring Nicholas Lyndhurst. He played Gary Sparrow who became an accidental time traveller going back and forth between the 90′s and the war torn 40′s in a love story where he juggles two women; one from each era.

Ezra Street (below) in Bethnall Green plays the part of the passageway Ducketts Passage which when he walks down it leads him back in time to wartime London. The litter bin and telephone boxes were props added to make it look more 90s-like. 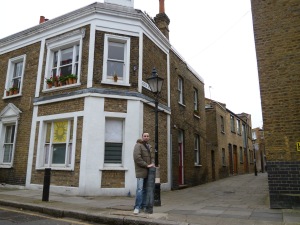 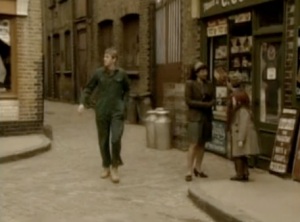 As the camera switches angles we see Gary in the 1940′s continuing on down the lane (above) where he finds and enters The Royal Oak pub (below) where he meets landlady Phoebe. The screenshots featured here are from the first ever episode which was when Gary stumbled upon that time period and so was not dressed for the era as he was on all subsequent visits of which there were many. 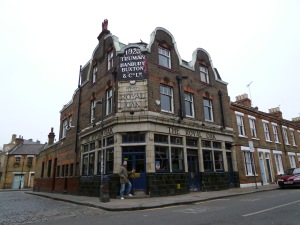 Having bought and subsequently watched the complete six series of the show last year I was very excited to locate this pub which also appeared as ‘Samoan Jo’s’ in ‘Lock, Stock and Two Smoking Barrels‘ and as an East end boozer in ‘The Krays‘. It can be found at 73 Columbia Road, E2 7RG close to the famous flower market.