It wasn’t just ‘Terminator‘ and ‘Back To The Future’  locations whilst Ethan and I were in L.A. as we also visited the apartment complex where Daniel and his mum moved in to at the start of the ‘Karate Kid’ (1984). It also featured in the sequel movies. The address is 19223 Saticoy Street in Reseda and we went here early in the morning on my birthday (the perfect present!) before hitting Universal Studios. Below left is the screenshot from the film and as you can see below right the place is not too different nearly 30 years after filming took place. Apart from the trees one difference is the apartment blocks entrance gate. Today it is an iron gate with a pin-code needed for entry but in the film it was a wooden gate which Daniel-san kicks open and promptly knocks over a fellow resident.

They walk up to Daniels new apartment passing by the swimming pool which his mum had been raving about. Sadly for them it was pretty much empty (below left) whereas when I was there the pool was in fine condition as seen below right.

At the bottom of the steps they meet the old woman and ‘Uncle Louis’ Dog’ who Daniel later brings down a bowl of water for. 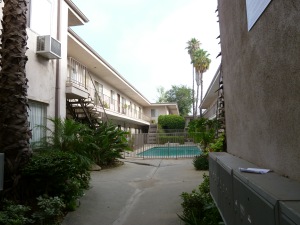 Daniel’s apartment is at number 20 and is the first door on the left at the top of the steps. The rocky waterfall feature seen in the film below left has been replaced by a hedge. 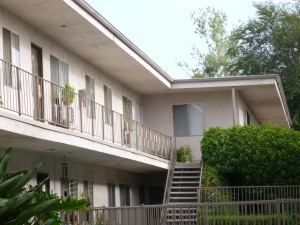 The tap is not working in Daniel’s apartment so he goes to find the janitor by walking down the steps from his apartment and going down a little alley where he finds Mr Miyagi practising his chopstick skills (though not in the conventional manner!) in his workshop. The lower left picture is where that workshop was which I guess was a temporary facade put up by the film makers. A security gate has been added. 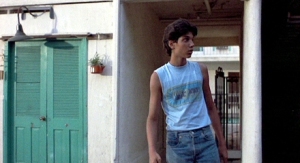 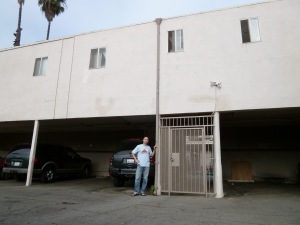 The above right photo are the bins where he dumped his bicycle following his second altercation with the Cobra Kai gang. To the right of that is the fence where the ‘skeleton’ fight scene takes place with Johnny kicking the sh*t out of Daniel before Mr Miyagi comes over the fence and intervenes giving the Cobra Kai a good kicking in the process.

This sequel starts exactly where the original one finishes including an overly long re-cap of the first film. There is debate around whether the first part of this movie was made at the same time as the original or if it was newly made. After that we see Miyagi’s amazingly beautiful garden and after receiving a letter from his family about his father being seriously ill he and Daniel-san are off to the main island of Okinawa in the south-west of Japan. However, it wasn’t really Okinawa but Oahu in Hawaii which filled in more cheaply. These reviews are categorized as being ‘set’ in Japan to allow for the inclusion of films like this!

I mentioned years ago in a pre-Okinawa trip post that this film gave me my first glimpse into Japanese life. One memorable feature of watching this at my mates house as a kid was the den-den daiko (hand-drum) which I had to wait nearly 20 years to get my hands on! On top of that there’s also tea ceremony and toro nagashi (floating lanterns) and we really get an insight into the charcters we fell in love with in the first film. Daniel’s love interest comes in the form of Kumiko; a Japanese dancer hanging around the place. I’d like to be able to say something profound about her being the first asian girl to tickle my fancy but the reality is that at that age I showed very little interest in any females!

Inevitably the story isn’t as good as the first and its premise is basically that this time Daniel-san is now fighting for his life rather than just for a Championship. As often happens with Hollywood productions we have the ridiculous scenario where two Japanese people, in this case Miyagi and his brother, speak to each other in English. As far as I know this only happens in an English classroom…..if you’re lucky!

I recently saw the 2010 re-make of the Karate Kid and was pleasantly surprised by how good it was. Admittedly I had low expectations as the original is one of my all-time favourite films and didn’t want to see the usual bad re-make. Perhaps the reason it was better than I thought was that it stayed true to the original in many ways with the main changes being the location (China rather than California) and of course kung-fu replacing karate as the martial arts skill. Why its even called the Karate kid I don’t know!
I was surprised by how much I liked the Jackie Chan ‘Mr Han’ character (a chance for him to actually act for once!) and indeed the remake but its just not as powerful as the original. Will Smith’s son Jaden may only be 12 but he was charismatic and cool in the lead role. Incredible to see a boy of that age with muscles! The chemistry between the two heroes in the original can’t be beaten and that film has had a lasting impact on many lives. It may not be in those top movie lists but its known by so many people. I can’t imagine the new one being remembered too far into the future although I did hear they were going to make another one. Not sure if it will follow the original part 2 as close as this one.
Given that the new one’s main character is so young the girl interest in the film is not so necessary and as much as I like Asian girls (not 12 year old ones though!) the Elisabeth Shue character is one I still look at and think as being very pretty which certainly can’t be said about most 80’s film actresses!
To be fair to the new film, Smith’s portrayal of ‘Dre’ is probably actually more convincing than Ralph Macchio’s ‘Daniel’ who, as much as I liked, didn’t really make me believe that he had become a karate expert. Though fearsome, the protagonists don’t play as much a part in the film as the ‘Cobra Kai’s’ (and particularly their leader Kreese) in the original which may be due to Smith featuring in almost every single scene if not them all!
Overall, this updated version of the Karate Kid was quite satisfying and very likeable and hopefully over time it will stand on its own feet without being compared to the original which of course is quite ironic as that’s exactly what I have done here!