One of the things that my mother-in-law wanted to do in London was to visit this very famous and hugely popular waxworks museum. I have to say that I’d never had too much enthusiasm for going to this place which may surprise regular readers (yes, such people do actually exist!) who have witnessed me travelling wide and far just to get my picture taken with a statue of some sort. However, I have always had a slight problem with there being so many of them in one place and the rather high entry fees probably put me off a bit too!

Before we arrived in England though, I went online and was able to book the four of us some tickets for an early evening visit which were sold at 50% lower fare and I guess £15 per ticket in this day and age ain’t so bad. The first part of the museum is a red carpet affair with some of the world’s biggest and most famous movie stars on show. It certainly hits you how busy this place is which took me a little by surprise as whenever I’ve seen friends pictures on Facebook at this place it’s looked like there’s been plenty of room and space to wander freely and get your photo’s taken with the stars! However, in reality it’s a mad crush and you’ve gotta almost force your way through to the front to get that all-important picture. Luckily my wife and mother-in-law were pretty good at that and soon got into the spirit of the place whilst my father-in-law and I took a little longer to adjust to the hordes of people in attendance. 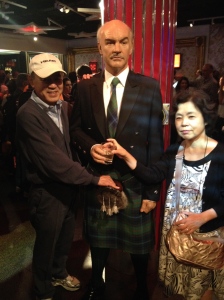 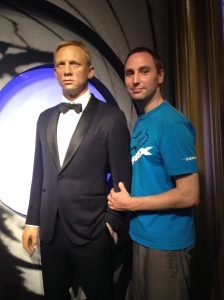 We then proceeded along the walking route to the ‘Sport’ section where I got my hands on the World Cup alongside England great Bobby Moore, met David Beckham again (there’s a model of him and his wife in the ‘Party’ zone) and got to hang out with rugby and tennis legends Jonny Wilkinson and Boris Becker.

It was in this section that I realised you really have to pick and choose the ones you want to get photographed with although I’m sure there are some people who do each and every model. Global superstars of past and present like Pele, Rafael Nadal, Tiger Woods and Usain Bolt featured among British talent like Tom Daley, Mo Farrah, Jessica Ennis-Hill, Lewis Hamilton and so on. All interesting to me but pretty much unknown by my wife and her parents! 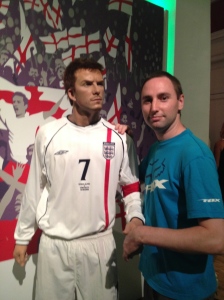 We passed through the royals (just too many people waiting for picture opportunities) and culture sections fairly quickly before stopping at the music section which was stocked full with models of pop queens like Madonna, Beyoncé, Lady Gaga, Britney Spears, Adele, Cheryl Cole, Kylie and Rihanna. Other legends like Bob Marley, Michael Jackson, Elvis Presley, Freddie Mercury, the Beatles and erm, One Direction were on display.

In terms of the waxwork models the World Leaders zone was pretty much the last area of real interest with the likes of Barrack Obama, Nelson Mandela, Boris Johnson and David Cameron (but no Japanese politicians!) featuring among others not that my wife knew who the latter two were when she took the above photograph! We finished off things with the Spirit of London ride; a black cab ride through periods of British history such as Elizabethan and Victorian era’s, Shakespeare, the Plague, the Great Fire of London, The Industrial Revolution, the World Wars, the swinging sixties and so on

The finale was the Marvel Super Heroes and their 4D movie experience went down way better than expected having had to wait nearly twenty minutes to see it.

Overall, we probably spent about 90 minutes in the place which in all honesty was fairly quick and proof that you could easily stay there for a few hours. Someone came up with the idea of stopping for dinner afterwards at the nearby Wetherspoon’s pub next to Baker Street Underground Station and my father-in-law finally got the chance to sample some fish and chips and a pint of Guinness.