Perhaps the best and most famous movie to have been shot in Malaysia is ‘Entrapment‘ (1999) starring Sean Connery and Catherine Zeta-Jones as two international art thieves. It’s fair to say that this film, which cost just $66m to produce, doesn’t have too much competition although the likes of ‘The Sleeping Dictionary‘ (2003) and ‘Indochine‘ (1992) are worthwhile competitors. For the record, ‘Beyond Rangoon‘ (1995) and ‘Anna & The King‘ (1999) were also filmed in Malaysia but ‘set’ in Myanmar and Thailand respectively.

The Petronas Twin Towers in capital city Kuala Lumpur feature throughout but the most prominent scenes are on 64 minutes (see the screenshots below) with a brief cameo on 98 minutes. In the initial scenes movie magic makes it seem like the Melaka River, which is 144km away, is just a stones throw from one of the country’s most iconic sights. This blending of the scenery for the two places had some local people up in arms but this kind of thing happens all the time and is part and parcel of film-making.

After a brief appearance on 75 minutes the film climaxes on 98 minutes at Pudu LRT station……or so it seems!! However, it is actually Bukit Jalil LRT station which is much further south along the same Sri Petaling Line. The signs were obviously just changed to its far more famous mass transit station and there’s also the rumour that it was changed as Pudu was the only station name that Connery was able to pronounce correctly.

I dragged my girlfriend here on our second day in KL to take the match-up shots I needed with the action first taking place on the platform heading back into the city centre as can be seen by the buildings in the distance of the screen-grabs below but naturally a lot of time has passed since filming took place at this station so the trees and bushes in the background of all shots has changed quite a bit and boy was I confused at times with which scene was done on what platform. I’m not even sure if each part was actually shot on the platform it supposedly takes place on!

Connery’s character Mac is a punctual man often saying “I’m never late!” and “If I’m late it’s because I’m dead!” but when he arranges to meet at Pudu station the following morning at 6.30am (as ‘Plan B’ is put into place) you just know its not gonna be that simple. 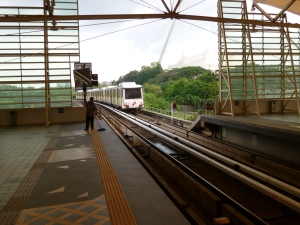 Sure enough, he shows up late for his meeting with Gin (Zeta-Jones) but with the FBI in tow too! He explains that he made a deal with them on his capture to help them arrest her. However, his plan is to help her escape which he does in a fashion which is a little bit ridiculous but nevertheless tense and exciting. 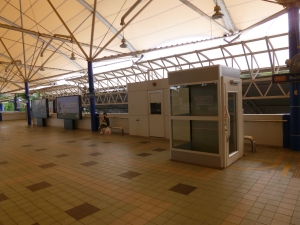 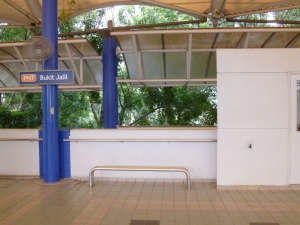 Once Gin has made her initial escape, Mac sits down on one of the benches but they are no longer in the station. Or they may have just been props added for the movie. The advertising screens were bare in the 113 minute movie, which was directed by Jon Amiel, but in reality they are always advertising something or another.

The other filming locations for this movie, which takes place on Millennium Eve, were in England and Scotland with the likes of Blenheim Palace, The Savoy Hotel, Borough Market, Duart Castle on the Isle of Mull, Eilean Donan Castle and Pinewood Studios featuring amidst the Malaysian scenes.

If you haven’t already seen it (why would you be looking at this page if you haven’t?!!) then you can watch ‘Entrapment‘ here