This entry incorporates some of the locations from the two Bridget Jones films; the good ‘Bridget Jones’s Diary’ and the much-maligned but not-actually-that-bad ‘Bridget Jones: The Edge of Reason’. The first place to start has to be Bridget’s flat (below left) which is above the Globe Pub at 8 Bedale Street in the heart of the Borough Market. 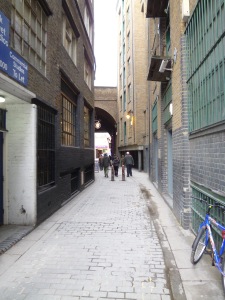 Hugh Grant plays Daniel Cleaver and his apartment is not so far from Bridget’s and is at Clink Wharf Apartments (above right) on Clink Street opposite the old prison which is now a museum. Momo is the restaurant (below) where Bridget gets advice from her friends before her first date with Daniel Cleaver. It is located at 25-27 Heddon Street just off Regent Street. 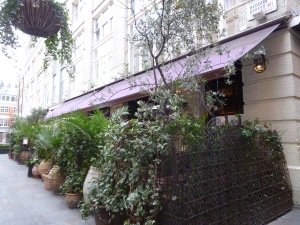 Picadilly Circus is of course famous for its illuminated sign which flashes up messages from Bridget’s diary in both films. The screenshot below left is from the first film and the Coca Cola real thing slogan below right is from ‘Edge of Reason’.

The films romantic finale takes place in the snow at Royal Exchange Buildings (below) in Cornhill very close to the Bank of England. Its here that Bridget catches up with Darcy and is relieved to see him present her with a new diary so that they can make a new start together as one.

And so its the happy ending at the end of ‘Bridget Jones’s Diary’ and from there we move on to the sequel where early on in the film Bridget is told to dump Mark Darcy by her friends inside The Light Bar (below left) at 233 Shoreditch High Street. Moments later she arrives at his house to discover the truth about Rebecca. This house can be found at 9 Kings Street in Richmond (below right) and is actually out on a bit of a limb compared to most other filming locations in the capital. However, I was at a family dinner nearby a couple of days after Christmas Day and so was able to pop out for a few minutes to snap the place seen below right. 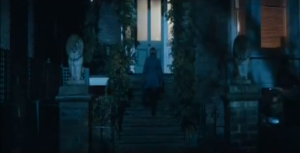 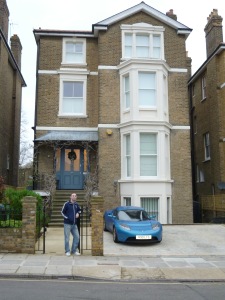 Undoubtedly the most memorable moment from ‘Edge of Reason’ is the fight scene between Colin Firth and Hugh Grant which ends up Kensington Gardens (below) amid its fountains.