There have been plenty of TV programmes about Japan over the years but they only really ever focus on Tokyo and Kyoto so it was refreshing that this three-part BBC documentary series exemplified that there is plenty of life beyond those two particular cities.

In the land of noisy, dumbed down terebi it was so nice to see this trio of one hour BBC2 episodes dedicated to showing Japan’s true wild side in it’s most simplistic form. The beautifully shot footage of Japan’s natural environment was left to speak for itself with limited voiceover from Michelle Dockery adding to the pictures. It’s all a far cry from the TV programmes that air in this country!

Originally shown in June 2015 these programmes each week featured on different regions of Japan with the last ten minutes of each episode being a very enjoyable diary feature giving behind the scenes information about how the filming was done which I found to be very interesting.

Here is a rundown and review of what was in each episode:

Episode 1: Honshu – Tokyo may be a concrete jungle stretching as far as the eye can see but the main island of Honshu where it’s located is around 75% mountainous. As explained in the ‘Journeys Into The Ring Of Fire‘ documentary this is why the cities are so crowded as people can’t live so easily in such environments.

Despite living in the most urban of places many of the residents of Honshu yearn for nature and throughout the year they sample it here and there. The seasons are very much celebrated in Japan and this episode starts and finishes with the magic of the brief cherry blossom season which shows the Japanese bond with the natural world runs deep.

About half of Honshu is forested and accordingly it’s a feast of nature here and the viewer gets a good insight into the lives of monkeys, tree frogs, giant carp, fireflies, bees, black bears, squid, tanuki and deer. There is nowhere where the paths of these animals and humans don’t cross and nowhere is that more evident than with the latter two.

However, their interaction with humans is very different. The deer of Nara spend their days hanging out with the many tourists around the temples and shrines of this famous area and are allowed to wander freely as they are believed to be messengers of the gods.Tanuki a.k.a. Japanese racoon dogs are rarely seen (apart from in this series of course!) for they roam the streets at night having been forced to adapt to urban landscapes after forests made way for concrete. They can be a nuisance but are also believed to bring good luck. 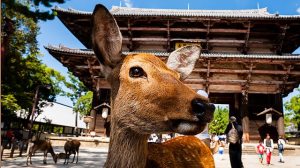 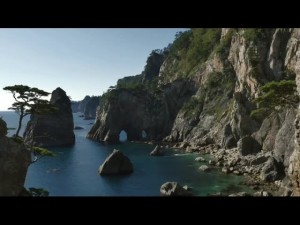 Episode 2: The South-West Islands – As you might expect this episode was more focused on aquatic life but first up was the truly unique sight of the Japanese macaque and deer species both living side by side on Yakushima island with the former riding on the latter’s backs.

Sakurajima is next to feature and this island has the most volatile volcano which has been erupting for 60 years. It could get quite violent at anytime and covers the city in ash every few weeks. I guess the residents are more than used to taking such precautions but seeing the school kids wear protective helmets is not something you see everyday! Believe it or not there are actually some benefits of the eruptions as it means the soil is very fertile and people go here to bury themselves up to their neck in sand to help improve circulation and vitality.

Perhaps the most interesting part of this programme was the section on sea-snakes whose greatest nemesis is actually two 70 year old women divers. They have been hunting snakes on the small island of Kudaka (just east of Okinawa’s main island) for 40 years and it’s been in the family of one of them for over 500 years. They brave the cave waters at night without any protection whatsoever to just grab the venomous sea snakes by hand. Inspiring stuff!

The lost world of Yonaguni is Japan’s westernmost island lying fairly close to Taiwan and therefore the first island to feel the force of the frequent typhoons which hit the country. Only as recently as 1986 were colossal terraced sandstone pyramids discovered off the island’s southern coast. There is still debate as to how the submerged monuments originated.

Other Hokkaido highlights included seeing the worlds tiniest wild boar on Iriomote-jima island, how mozuku seaweed is grown, a caterpillar transforming into the largest moth in the world and heavy crabs that can’t swim and have to wade to a safe distance to release their precious eggs without getting swept out to sea. 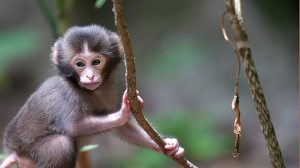 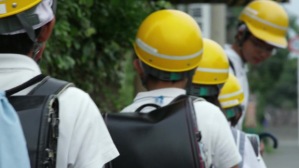 Episode 3: Hokkaido – Only 4% of Japan’s population live on Japan’s wildest island which is home to the brown bear. Way back in the past when Russia and Hokkaido were attached, their ancestors could actually walk to Japan’s most northerly island from Siberia. This episode showed a brown bear and it’s two cubs hunting for salmon which was quite possibly the highlight of the whole series for me. In the area they filmed in on the north-east coast, there are around 200 brown bears and the post-show diary part showed how the bears and fishermen integrate into society without too much fear from either species.

Other highlights included seeing two stag’s fighting, cranes doing some kind of ballet having been close to extinction last century and sika deer, the toughest in the world who are prepared for everything that’s thrown at them and have to search  for food buried deep beneath the snow.

It wasn’t just about animals though as once the harsh winter season is over, there’s a dramatic colour change and transformation which sees Hokkaido resemble rural England. The narration tells us that Hokkaido never stands still and it’s seasons rush by which is proved by it’s short Spring and Summer seasons. During July it becomes positively Mediterranean-like whilst the rest of Japan sweats it’s way through extreme hot and humid conditions. 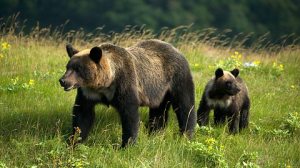 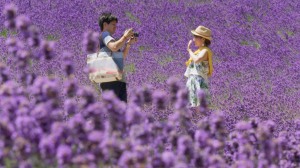 The landscapes of Japan’s 6000 islands are highly varied and range from volcanic mountainous terrain to subtropical warmth and throughout this wild and mysterious land. This series provided a great insight into the extraordinary relationship that’s developed between the wildlife and the people whose lives are entwined.

One of the first proper books I ever read was ‘the lion, the witch and the wardrobe’ and I also enjoyed the BBC tv series of the chronicles of Narnia series including the aforementioned book. It was with intrigue that i went to watch the film adaptation yesterday afternoon. Basically i hated this film. I have heard its a poor-mans Lord of the Rings but i can’t back that comment up as i have never seen or read that series as i have no interest in such childrens fantasy stories.
I  was only about 10 when i enjoyed Narnia but obviously i have matured greatly (?) since then and just cringed at what i saw happening in front of me on the big screen. Don’t get me wrong, i think the film has been quite well made but i decided that i don’t actually like most of the story and just sat there thinking ‘as if!’ as i watched the story unfold.  How could i have been so foolish when i was younger?!! Lock me in the wardrobe please if this rubbish is ever on TV!