Since moving in together and getting married, my otaku collection has basically grind to a halt which is actually no bad thing as I was a somewhat inadvertent collector anyway who only built up a collection out of boredom and from seeing figures on sale so cheaply in a recycle shop near my old place. However, married life hasn’t stopped me from doing a bit of window shopping from time to time at some of my favourite shops throughout the city with the occasional cheeky purchase too!

Here, in no particular order, are the Tokyo Fox top 5……Otaku shops in Tokyo! 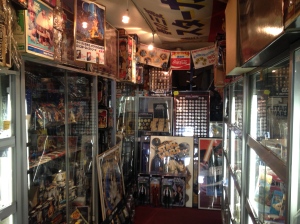 No franchise has churned out as many wide and diverse products as Star Wars and this place is the mecca for any fan of the galaxy far, far away. Stocked full of figures and other miscellaneous items like curtains, posters, coins, vintage soap, glasses, lunch boxes, cups, cereal packets, badges, cards, stickers, Pepsi-related products as well as a BMX and a video-game machine. More details here 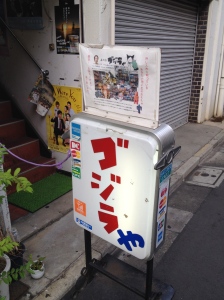 The name of one of Tokyo’s oldest toy collector shops may imply otherwise but strictly speaking this isn’t actually a Godzilla shop. Of course, the giant radioactive lizard features in part but there’s also other Japanese anime and manga-related goods from the likes of Astro Boy and Ultraman. Like StarCase, it could do with a bit of a clean for neither place has the most aesthetically pleasing glass cabinets.

Specialising in comic books and collectible cards this place also possesses some pretty awesome vintage collector toys and figures. It’s vast collection of Topps trading cards (called bubble gum cards when I was a child!) relaying the story of each movie in picture form is pretty impressive. A piece of inedible chewing gum is included in the packets from the pre-1990 era such as ‘Back To The Future‘, ‘Gremlins‘, ‘Indiana Jones‘ and ‘Ghostbusters’.

Located just a couple of minutes walk from Ebisu station, this toy shop has been importing goods from the USA since 1992. Naturally, the products change but staples include Star Wars, Power Rangers, Transformers, Batman, Superman, Spiderman, Turtles, Cars, My Little Pony and all other manner of Hasbro figures as well as key rings, t-shirts, posters and a load of Marvel comics. Not cheap but a very awesome place! 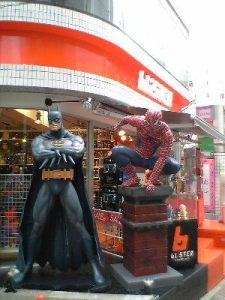 Quite possibly the first place I found in Tokyo nearly a decade ago. Formerly located in Harajuku, this world characters store is still going strong and has found it’s spiritual home in Akihabara in the last few years. Similar to Monster USA in terms of its content but be aware that it is seemingly closed more than it’s opened! 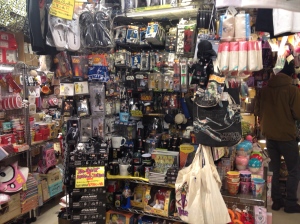 These are no ordinary book shops and are instead packed full of offbeat goods with all kinds of snack foods, novelties, gadgets, mobile-phone cases, kitchen devices, shoulder bags, home-ware, lava lamps and toilet shaped curry plates. The perfect place for not-so-serious gift giving. Pop culture abounds with plenty of goods from Star Wars, The Simpsons, Moomin, Hello Kitty, Teenage Mutant Turtles, Frozen, Spider-man, Batman and so on. Oh and they do also sell some books!

Honorary Mention: Nakano Broadway, Nakano-ku – The second and particularly the third floor in this shopping centre is packed full of otaku shops.