Always keen to add a twist or two to these ‘set in Japan’ reviews here is the first  review of an animated movie. My sister told me at Christmas that ‘Cars 2‘ featured Japan and I had hoped to watch it with my nephew but sadly that never happened and so I ended up viewing it all alone one afternoon which is pretty sa-a-a-a-ad!!

Having been challenged to a series of races by an Italian car, Lightning McQueen and his tow-trucking sidekick Mater head to Japan and Europe to compete in the World Grand Prix. Now I’ve not seen the original ‘Cars‘ (2006) movie so all the characters were new to me but I do now that Lightning McQueen is the prime protagonist. However, in this film the roles are pretty much switched as Mater becomes the main focus as he becomes sidetracked in an international espionage adventure via the classic movie mistaken identity scenario.

Lets start with the positives then. Naturally, for a series titled ‘Films Set In Japan’ it is the scenes set in Tokyo which I was most interested in. There’s plenty of attention to detail here (both automobile-related and otherwise) to please and amuse those who know what Tokyo is like. Alongside some fantastic animated views of Mount Fuji, Rainbow Bridge, Tokyo Tower and the neon-lit city there are references to vending machines, capsule hotels and state-of-the-art toilets and the fight in the latter is quite reminiscent of the pre-title sequence in Daniel Craig’s first outing as 007 in ‘Casino Royale‘ (2006).

What this film is lacking in though is any kind of story. The plot is far too convoluted for a kids film and it’s been so over-stuffed that one can’t even remember which plot they should be focusing on at times whether it be the race, secret agent or alternative fuels one. The kids surely want to see racing scenes but they seemed almost incidental at times in this Pixar-produced sequel. Heartwarming moments are few and far between and too many of the characters are just not that interesting or funny!

There seems to be too much focus on Mater who doesn’t really cut it as the lead character and his slightly annoying country drawl and demeanour starts to grate a bit as the film drags on. It may be funny when he’s in the supporting role but when it’s the centre of attention it fails to amuse so much.

Furthermore, all the stuff about environmentally friendly alternative fuel sources is a bit forced and comes across as a little bit preachy. Cinema is one particular part of the entertainment industry which is disposable and I, for one, really didn’t feel the need for Pixar to climb on their moral high horse and start telling us about how bad the oil companies are. The (far too limited) racing scenes may keep the children happy but I don’t believe that too many of them would have followed the plot about oil companies, mafia and espionage. 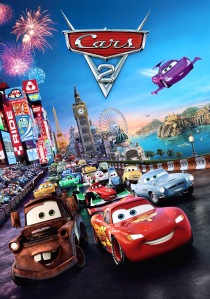